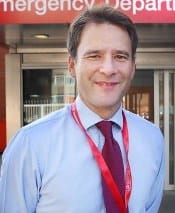 Like many young surgeons, I was excited by the immediate clinical rewards of treating trauma patients. A year abroad as a junior surgical registrar in a South African general hospital heightened my interest in the specialty, one which seemed to demand timely, effective decision-making allied to bold technical proficiency across the panoply of anatomical zones.

My aspirations to pursue this as a career option were dampened by the fact that there was no formal route to training in trauma in the UK . Setting off on Higher Surgical Training in 1999, and having chosen vascular surgery as my sub-specialty interest, I kept my trauma aspirations alive by undertaking further training at the Johannesburg General and Royal London Hospitals. These pivotal training opportunities were afforded through the support and encouragement of an enlightened training programme director.

A decade has passed since my appointment as a consultant vascular and trauma surgeon and the organisation of trauma care in England has improved greatly. The implementation of designated Major Trauma Centres, Trauma Units and Trauma Networks – subject to rigorous peer review - has resulted in palpable reduction in trauma mortality. Access to trauma skills training has also improved, in line with these long awaited developments. Indeed, during my time as College Tutor in Trauma and Emergency Surgery I was gratified to see that Damage Control Surgery courses such as Definitive Surgical Trauma Skills DSTS and Damage Control Orthopaedic Trauma Surgery DCOTS) moved from niche educational products to established markers of surgical preparedness.

Firstly, that even the best of these short courses is no replacement for formal training pathways that address the multitude of operative or non-operative therapies that bleeding Major Trauma patients may require.

Secondly, that the fruits of successful early management can be undone through subsequent voids in the orchestration and execution of on-going care, but there is no training for MTC surgeons who wish to take on this responsibility. Indeed there is a dearth of leadership training programme for surgeons envisioning a higher role in the management of Trauma Networks.

Thirdly, that whilst the re-organisation of care has quickly delivered improved outcomes, the contribution to surgical capability within these networks rests on the shoulders of a small band of enthusiasts who gained their experience ad hoc from high volume centres in the US and South Africa, or overseas military deployments. The lack of a training pipeline to produce consultants who can assure the provision of holistic trauma care beyond the Emergency Department is a key deficiency in British surgical training and must be solved if Trauma Networks are to be sustained.

Council has recognised this issue and took action to establish a working party charged with examining the problem and making recommendations. The subsequent report - which was the formulated with input from a multitude of surgical specialties (as well as Emergency Medicine physicians and Anaesthetists) - was recently published. It sets out the problem and suggests curriculum-mapped pathways that could deliver the required trauma competencies via rotations through Major Trauma Centres, Trauma Services and specialist units.

Importantly, it recognises that for trainees who wish to declare a trauma interest, the acquisition of such competencies must sit alongside and complement the development of other skill bases – including elective and emergency skills - that support the whole span of a consultant’s career. Training pathways must be sufficiently integrated to allow the trainee to develop their trauma ambitions without negating aspirations to cultivate an elective sub-specialty or emergency (non-trauma) practice.

The College is now working with Health Education England, Specialist Associations and other bodies to explore the practicalities of implementing Resuscitative Trauma Surgeon and Major Trauma Consultant training paths. It is likely that pilot programmes administered by selected Schools of Surgery will go live within the next 18 months. The College has been instrumental in advancing Trauma Care for more than three decades – from the introduction of ATLS and DSTS and a host of other trauma courses, to facilitation of pre-deployment training for Defence Medical Services and standard-setting. Formalised surgical training in trauma is the next milestone, and I am optimistic that the College’s efforts to bring this to reality will secure even better care and improved outcomes for injured patients.

Mr Nigel Tai is a Trauma and Vascular Surgeon at Royal London Hospital.