A great surgeon can come from anywhere 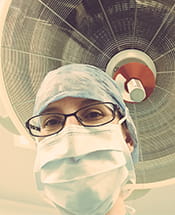 I am an ST5 in general surgery. I’ve always been ambitious. I did well in my medical school exams at the University of Cambridge and King’s College London, and I had a fantastic time on my trauma surgery elective in South Africa. Nevertheless, I didn’t know if I had what it took to be a surgeon.

Fortuitously, in my first surgical job as a foundation year 1 doctor, I was working for Fiona Myint at the North Middlesex Hospital. I sometimes wonder whether I would have pursued a career in surgery if I hadn’t found such an exceptional role model.

I used to think that all the battles for equality had been fought - and won - by my predecessors. Even through my core surgical training in London, and the start of my registrar training in Oxford, I never gave such issues much thought.

At ST4 I took time out to have two children. It was when I returned to work less-than-full-time that I noticed the inequalities in surgery. I decided to learn more by attending Medical Women’s Federation (MWF) events and connecting with other female surgeons on social media. I learned about unconscious bias, imposter syndrome, the gender pay gap, and disparities in leadership positions and awards.

I became an MWF regional representative. I am now passionate about promoting diversity and inclusion in surgery, as well as STEM (Science, Technology, Engineering and Mathematics). Diversity benefits the profession. Training posts are going unfilled, and this is partly because recruitment to surgery has not kept pace with the changing demographics of medical school graduates. Increasing diversity, rather than recruiting from a shrinking pool, will improve the calibre of candidates.

I am also passionate about equality because I love my job, and nobody should be deprived of such a rewarding career due to who they are or where they come from. To paraphrase Anton Ego (Disney’s restaurant critic from Ratatouille), I believe that, though not everyone can become a great surgeon, a great surgeon can come from anywhere.

There is never a dull moment in surgery. It is intellectually stimulating, and requires creativity as well as dexterity. Problem-solving is a huge part of the job. What is often under-emphasised is the enormous amount of patient contact involved. Communication skills are vital: they transform a patient’s experience of their care. That is one of the things I enjoy most about upper gastrointestinal surgery and bariatrics. Decision-making is very much a patient-centred process, with the potential for life-transforming results.

My advice for anyone considering surgery, whether they’re a student or a junior doctor, would be to spend as much time as possible in theatre and engaging with surgeons on ward rounds and in clinic. Ask questions - surgeons often love to talk about their life stories. Be ambitious - apply for prizes, take extra courses, submit your projects for publication and presentation.

I have two pre-school-age children, and my husband is a gastroenterology registrar, currently working on his PhD, so I don’t have much spare time. Technology allows us to stay organised: synchronized calendars, detailed to-do lists and electronic reminders are now an essential part of my life!

Rotas do get in the way of the routine that children crave; we try to ensure we have regular family time, even if it’s just a woodland walk. Working less-than-full-time is one of the best decisions I ever made. It will take longer to become a consultant, but life is very much about the journey, not the destination.

Rebecca Grossman is one of the surgeons featured in our #PressForProgress campaign to celebrate International Women’s Day 2018 (8th March) and the 100th anniversary of women securing the right to vote.