When war broke out in 1914, the British Expeditionary Force (BEF) did not enlist any dentists. The medical need for dental officers on the Front was not recognised until Field Marshal Douglas Haig suffered a severe toothache during the Battle of Ainse (12-15 September 1914). A dentist was summoned from Paris to attend him. As a result, the number of dental professionals increased within months, and by November 1918 there were approximately 850 dental officers.

The nature of trench warfare saw an unprecedented scale of severe facial and jaw injuries, and the work of plastic surgeons such as Sir Harold Gillies (1882-1960) is well remembered for treating these wounds, and developing new surgical techniques in plastic and reconstructive surgery. However, patient case notes and files of dental surgeons treating soldiers with these injuries recalls the important contribution of dental professionals in the management of facial and jaw wounds.

The Archives of the Royal College of Surgeons of England holds two significant collections of patient case notes and files; one of the dental surgeon, Harry Stobie (1882-1948) and the other of the dental surgical team at the 3rd London General Hospital in Wandsworth. These records contain detailed descriptions of the types of injuries inflicted on soldiers by artillery shells, high-velocity bullets, shrapnel and explosives. They also document the progress of the treatment patients received. These files and notes provide a valuable insight into the complexity of facial and jaw injuries from the battlefield to the home front, and how the skills and expertise of dental surgeons played a crucial role in treating these injuries. 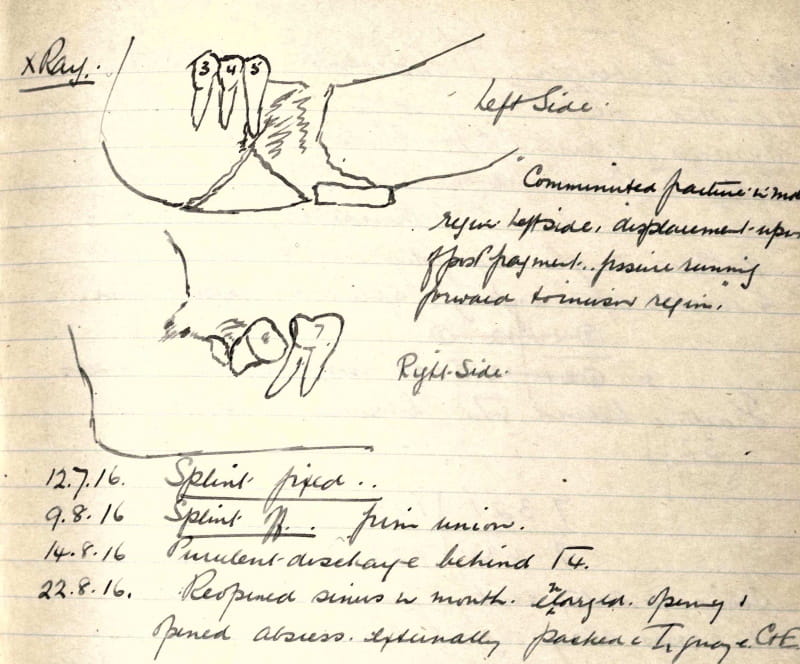 During the war, Stobie was appointed as a surgeon specialist under Sir Frank Colyer (1866-1954) at the Croydon War Hospital for Injuries of the Jaws. Before Harold Gillies established his unit in Aldershot in early 1916, Croydon was Britain’s only specialist jaw institution. Stobie’s patient records are a valuable resource for tracing the lives of the soldiers he treated. The patient register (MS0298/1) lists the soldiers’ names, regiment numbers, dates of injury, hospital admission and discharge dates, and additional notes on the state of their injuries and treatment, between the years 1915-1919.

The patient ledgers from 1916 (MS0298/2) and 1918-1919 (MS0298/3-8) go into more detail about the types and causes of injury, with diagrams of the injury and timelines of the progress of treatment. Dates of X-rays, dentures and splints fitted and removed are also noted throughout the ledgers. The RCS England Hunterian Museum holds the radiographs and dental casts of the patients treated at Croydon, demonstrating the range of jaw fractures the hospital was receiving from the Front. Stobie’s rough observations of the injuries recorded in his ledgers correlate well with these radiographs and casts in providing a technical insight into the process of assessing and treating oral injuries. 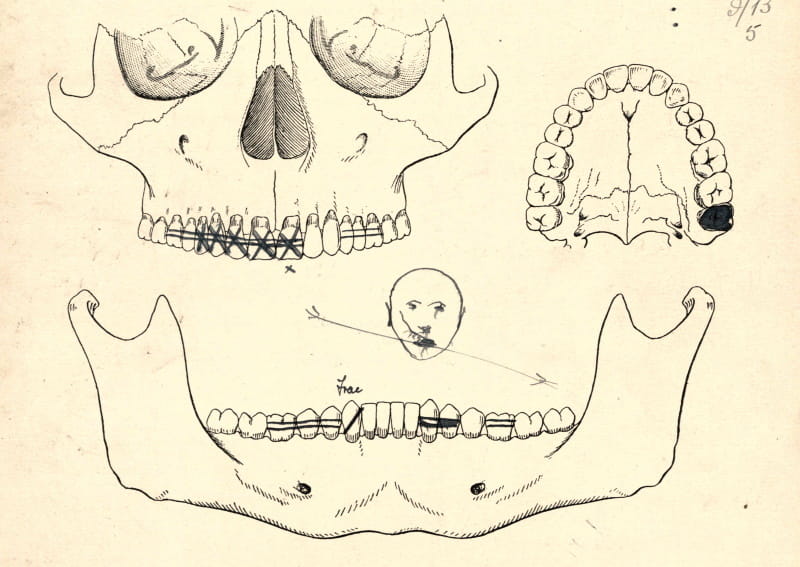 Above: Visual template documenting a fracture of the jaw caused by a gunshot wound, 1917. Archives Reference: MS0563/7.

Similarly, the patient case files of the dental surgical department led by William Warwick James and William Hern at the 3rd London General Hospital provide a meticulous insight into the treatment of facial and jaw injuries. The medical case sheets (MS0563) record graphic descriptions of the injuries and how they were inflicted on each of the individual soldiers. Bullets fired from rifles and machine guns travelled at supersonic speeds, leading to devastating injury on impact. They also chart the lengthy process of monitoring and treating the wounds.

Furthermore, technology used to analyse and monitor injuries such as X-rays are recorded. Early X-ray machines were not well-suited for facial injuries, however Warwick James believed that this technology allowed him to better view the depth and subtleties of the injuries as part of recording the progress of treatment. At the Queen’s Hospital in Sidcup, a similar process was undertaken with the pastel portraits created by artist and surgeon Henry Tonks to record Harold Gillies’ plastic surgical work. These portraits are preserved in the RCS England Hunterian Museum collection.

Despite the initial ignorance of the BEF to officially incorporate dental professionals into their ranks, the case notes and files in the RCS England Archives demonstrate how dental surgeons played a significant role in the treatment of facial and jaw injuries. These records are valuable not only in exploring the history and development of oral surgery during the war, but they help to document the lives of the individual soldiers who were treated, revealing the grave physical impact of trench warfare. They remind us how the prevalence of facial and jaw injuries encouraged different specialities to collaborate on the management of these wounds, and how these stories can again be revealed.